The people of Nsungwale Village in Binga District, Zimbabwe woke up on the morning of February 11th, 2020 to massive destruction and flooded homes due to the incessant rainfall that had been taking place the previous days. This comes on the heels of a series of droughts in 2019 that the World Food Programme said were the country’s worst in 40 years. Combined with the worst economic downturn Zimbabwe has seen in a decade, the droughts propelled nearly 8 million residents—half of the country’s population—into a severe hunger crisis. Now, with industry shrinkages, unemployment, and multiple curfews and lockdowns resulting from the COVID-19 pandemic, putting food on the table has become an even greater challenge for Zimbabweans.

The floods exacerbated these already insurmountable problems in Nsungwale. According to the Binga District Administrator (DA), a total of 180 households and 810 individuals were seriously affected by the flash floods in February. Bridges, roads, livestock, and crops had all been washed away as stranded villagers awaited rescue by incoming helicopters.

Island Hospice and Healthcare, one of Global Partners in Care’s (GPIC) international partners, has a branch facility that operates in the nearby city of Bulawayo. With financial support from GPIC’s 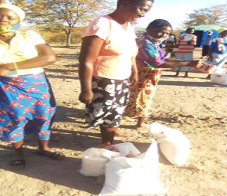 Disaster Response Fund, local partners traveled 580km to the Nsungwale Village and distributed 10kg mealie meal (the region’s staple food) and 500g sugar beans to each of the 180 households whose stored grain and crops were destroyed by the floods. The Bulawayo Island Hospice and Healthcare team noted that they were received warmly by village members who were indeed very desperate for food relief. The villagers repeatedly said the phrase “twalumba loko”, which means “thank you very much” in their local Tonga language.

Island Hospice and Healthcare emphasizes that there is still a great need for relief for the Nsungwale villagers. In fact, 37 of the affected families have been living in temporary shelters since the flooding—their plans to resettle have been put on hold due to a COVID-19 lockdown. Nevertheless, the relief efforts by our Zimbabwean partners reveals a strong commitment to disaster relief and a flexibility of palliative care providers to adapt their services to the needs of their communities. The COVID-19 pandemic has created a number of problems unique to the virus itself, but it has also complicated a number of these ongoing crises—like food insecurity—that the world continues to grapple with. It is our job as palliative care advocates and providers to ensure the health and safety of our patients and communities as their day-to-day struggles are altered, and often worsened, by this pandemic.

Global Partners in Care is so thankful to our donors who make relief efforts like this possible. Island Hospice and Healthcare’s Executive Director, Mudwin Mundawarara summed it up perfectly by saying “As is always the case, we would love to have done more but what was done was greatly appreciated.”

The Spread of COVID-19 in AfricapreviousPamoja Twaweza – Together We Can!next