The Rocking Horse Project (RHP) received a referral last year for patient Sarah* (not the patient’s real name) diagnosed with osteosarcoma. The doctors explained that the patient would be undergoing chemotherapy and the amputation of her left leg. We continually kept in touch with the patient and her mother, checking on them regularly and visiting them during her admission in the hospital. We visited after she had undergone amputation of her leg and along with the palliative care department at the hospital, provided the support they needed. 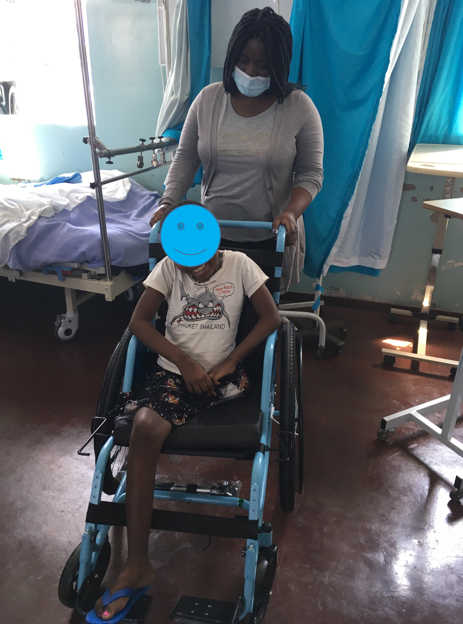 Sarah was a strong girl and rarely complained about pain or feeling sad. She accepted the amputation of her leg surprisingly well and was determined to continue life as normally as possible. She shared with one of the doctors that she had wanted to be a policewoman but knew that this may no longer be possible. When the doctor said she could have a prosthetic, she was delighted that her dream could still be a reality. With her approval, she had some sessions with a psychologist, and we were all glad she did as we felt this was necessary after this huge adjustment and moving forward.

The hospital requested that before discharge, she needed to have a pair of crutches, so we arranged a new set and brought them to her. What happened next was something we never expected – Sarah saw us from a distance entering the ward and her face lit up with a priceless smile as her eyes fell on the pair of crutches. She was so excited to receive them and quickly perched herself up in bed, took the crutches and hopped up testing them out. The same reaction was received when The RHP later obtained a wheelchair for Sarah with the assistance of The Luke Commission. The ease of her being able to move around with little assistance, made her feel happy and more independent.

One day The RHP team had an idea of doing a mini picnic as Sarah had been admitted for some weeks and one could see the toll of not being able to go home. Sarah said she wanted some takeout food so in a quiet area of the hospital out of the ward, the RHP team, Sarah and her mom had a mini picnic of fried chicken, chips and ice cream on a beautiful warm day. Sarah was discharged soon afterwards and was so happy to be back home and going for chemo sessions at an outpatient clinic.

Early this year after a follow-up visit to the oncologists, we were informed that the cancer had spread to her lungs and she was in need of end of life care. We were requested to especially support mom during this difficult time. This news broke our hearts as we had hoped she would recover well with the given treatment. Despite feeling so unwell and coughing, Sarah managed to break into a small smile upon seeing us. We prayed with Sarah and her mom before dropping them at the transport that would take them home, not knowing that it would be the last time we would see her beautiful smile. A few days later, the play coordinator called to ask how Sarah was doing and mom said she was feeling stronger, happier and that the coughing had subsided. Two days later, mom called the play coordinator to say Sarah had passed away. Going through so much and hardly ever complaining Sarah fought right up until the end.

Patients referred to The RHP are never just patients, but friends who are truly cared for. Sarah’s shy beautiful smile and her small giggles that matched her stature will always be missed.

In honor of Sarah and others, let’s always support and care for all the other children and their families   walking this cancer journey and let’s continually raise awareness of the early warning signs of childhood cancer to beat this disease.